The first snow is falling down here in the Netherlands and even though it is melting the second it touches anything, it sure is cold! Which means it is time for some more traditional Dutch winter dishes.

Traditionally, pea soup is cooked with a pig leg for taste, but since that is very hard to obtain here I am using pork chops.

This soup is best after being chilled for a day, because the soup will be thicker when cool. My mother used to put the hot stockpot outside over night, covered with a lid (and something heavy) to prevent animals from eating it before we could!

Bring the water with salt, peas, pork chops and bay leaf to a boil and simmer for about 20 minutes. Peel the celeriac and cut into even chunks. Cut the leek and rinse it with the celeriac to remove any remaining sand or dirt. Drain the vegetables and remove as much of the excess water as possible. Chop the onions and add them to the veggies. Cut the celery with a pair of scissors or finely chop. 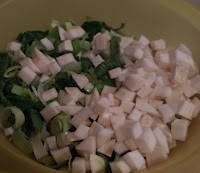 Serve with pumpernickel or dark rye bread with smoked bacon. 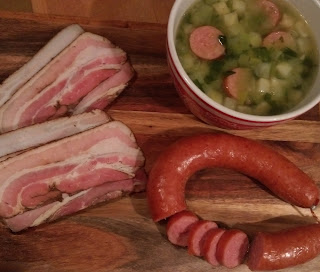