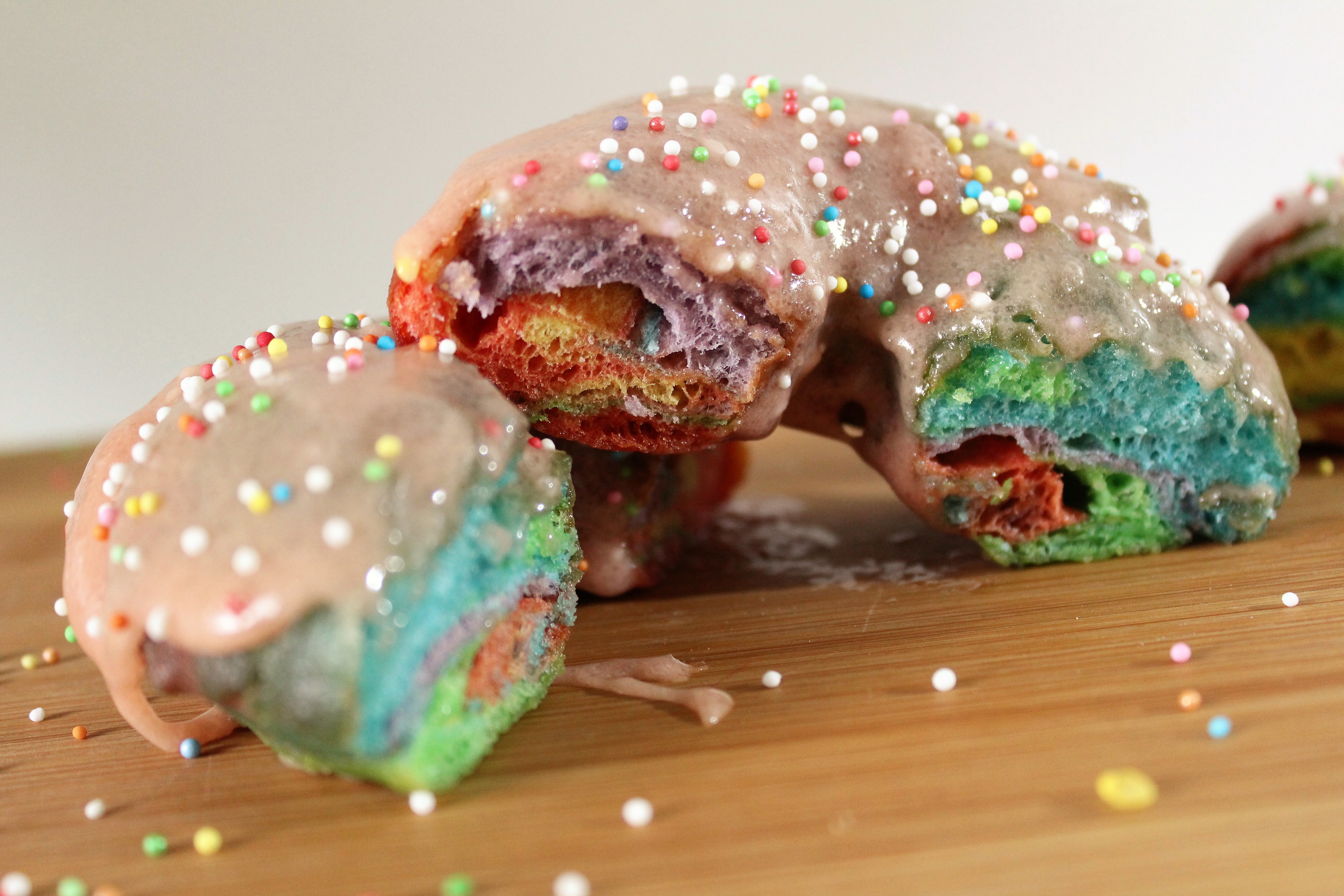 In the mid-19th century, the Dutch began making a treat known as olykoeks (oil cakes). These donuts were balls of cake, which were cooked in pork fat until they were golden brown. The problem with these treats was that the cake cooked much faster on the outside than on the inside, leaving an uncooked center when the outside was done. To solve this problem, they started stuffing the treats with nuts, fruit, or other fillings that didn’t need to be cooked. When Dutch immigrants began to settle in North America, they kept making olykoeks. 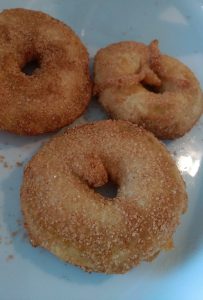 In 1847 an American ship captain named Hansen Gregory came up with a better solution for the uncooked center. He punched a hole through the center of the dough, removing the uncooked center. There are however a few other versions of how the hole ended up in donuts. Some people say that Captain Gregory wanted to steer with both hands while enjoying his tasty treat, so he impaled his donuts on the ship’s steering wheel, creating a hole in the middle. 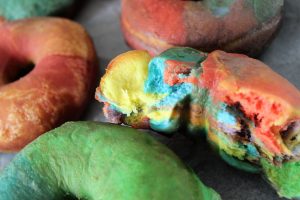 Since Germany has now (finally!) legalised same-sex marriage, I thought I’d share a little pride this Fry-day with rainbow coloured doughnuts with marshmallow frosting. If you’d rather go vanilla, that’s totally cool too! Just leave out the food dyes and powder them with icing sugar. Very tasty too! 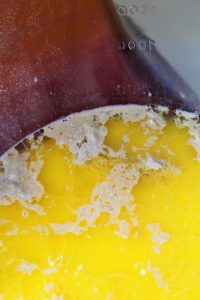 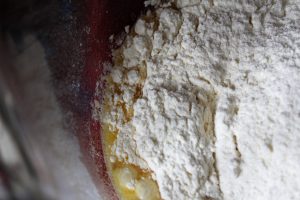 Heat the milk until it is warm but not hot, about 35°C. In a large bowl, combine it with the yeast. Stir lightly, and let sit until the mixture is foamy, about 5 minutes.
Use an electric mixer or a stand mixer with a dough hook to beat the eggs, butter, sugar and salt into the yeast mixture. Add half of the flour and mix until combined, then mix in the rest of the flour until the dough pulls away from the sides of the bowl. If the dough is too wet, add more flour, about 2 tablespoons at a time. Transfer the dough to a floured surface and gently knead it until smooth. 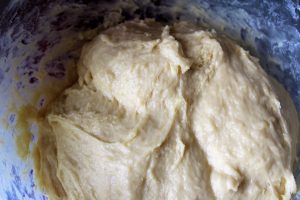 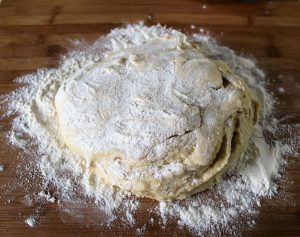 Now comes the fun part! If you want normal doughnuts(or don’t have enough time to go over-the-top), skip to the next step and continue at the arrow. If you want to go full unicorn (aww yiss) follow these steps. 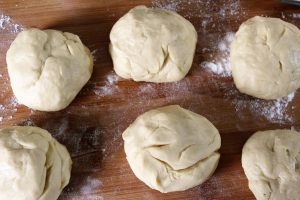 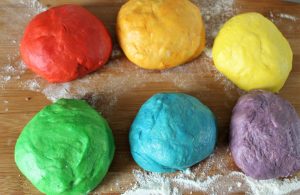 Weigh your dough and divide it into equal parts. I divided it into 6 pieces, because I want to make rainbow doughnuts, but you can choose the amount of colours you want and just go with that. Take each dough ball and add a few drops of food dye to give it the desired hue. Knead it on a floured surface, until the colour is no longer marbled. This may take a while, but don’t give up! Repeat until every dough ball is done. 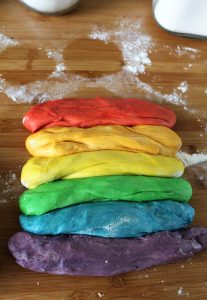 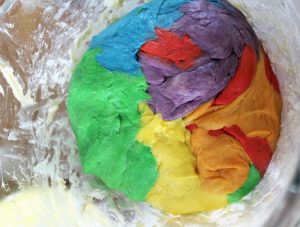 ⇒ Grease a large bowl with a little oil and dust with flour. Transfer the dough to the bowl, and cover with plastic wrap. Let rise at room temperature until it doubles in size, about 1 hour. 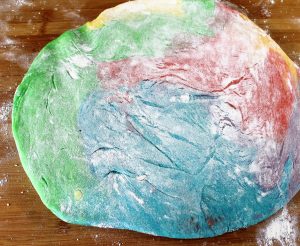 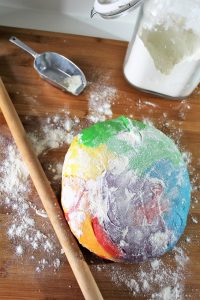 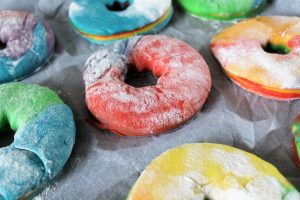 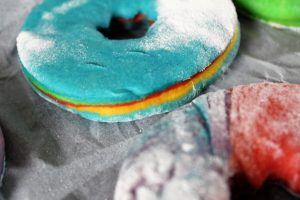 Turn the dough out onto a well-floured surface, and roll it to 1,5 cm thickness. Cut out the doughnuts with a doughnut cutter or a drinking glass and a shot glass (the large one should be about 10 cm in diameter). I didn’t have a shot glass at hand to cut out the middle, so I used a flower shaped cookie cutter. Reserve the doughnut holes! If you’re making filled doughnuts, don’t cut out the middle. Knead any scraps together gently and let it rest for a few minutes before repeating the process.

Put the doughnuts on two lined baking sheets so that there is plenty of room between each one. Cover with a kitchen towel, and let rise in a warm place until they are slightly puffed up and delicate, about 30 minutes.
About 15 minutes before the doughnuts are done rising, put the oil in a heavy-bottomed pot or frying pan, and heat it to 190°C. Meanwhile, line cooling racks, baking sheets or plates with paper towels. 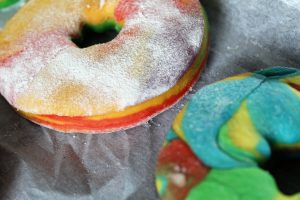 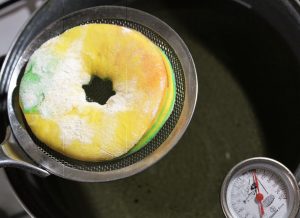 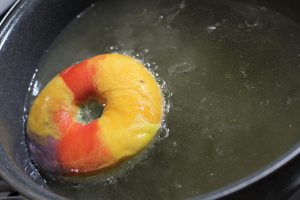 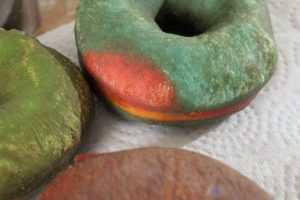 Carefully add the doughnuts to the oil, one at a time. Use a metal spatula or slotted spoon to pick them up and slide them into the oil. After 45 seconds to a minute, use a slotted spoon to flip and cook for another 45 seconds to a minute. Cook until they’re deep golden all over. Doughnut holes cook faster, just keep an eye on them and flip if they’re golden brown. Transfer the doughnuts to a cooling rack lined with paper towels, and repeat with the rest of the dougnuts. Adjust the heat as needed to keep the oil at 190°C. 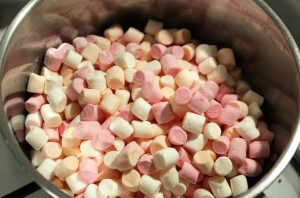 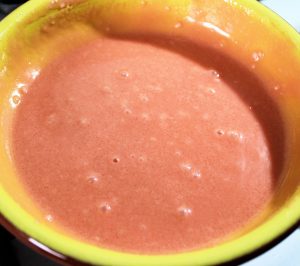 Melt the butter and water in a saucepan over medium-high heat. Add marshmallows and stir until completely melted. Add the extract, then whisk into sugar to make a smooth frosting. Add a few drops of foodcolouring, to create bright, Simpsons’ pink frosting for your doughnuts. 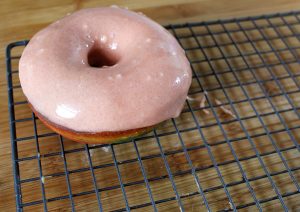 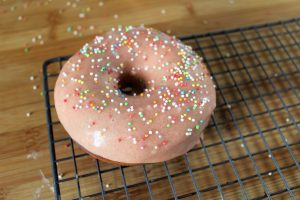 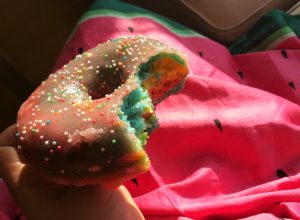